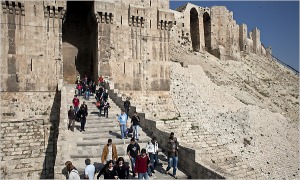 Times readers are coming! First Damascus is chalked up as the next Marrakesh. Now Aleppo is plastered in the Sunday travel section, with the obligatory shill for vastly overrated Beit Sissi and some evocative prose about the souk. Though can’t hate too hard — I love Aleppo. As for whatever their writer has to bemoan about the bar at the Baron Hotel, the bartender is delightfully surly and the old leather chairs comfy despite the Euro-tourists.

Having contributed some stories of my own on the looming tourist boom in Syria, I can’t totally decry this cozy travel coverage. For a look past the souk and cherry kebab of Aleppo, though, might I plug my Syrian travelogue for the Faster Times one more time? A Syria roadtrip, seriously.

Saudi’s Petra, Madain Saleh, last year became the country’s first UNESCO World Heritage Site. What few tourists there are in Saudi Arabia now head up to the north edge of the Hejaz for a glimpse into the ancient Arabian Peninsula, what was possibly the southern extent of the Nabatean kingdom at Petra. But the politics of digging in Saudi, where for some extreme conservatives the discovery of Jewish or Christian ruins is an affront to Islam and its holy geography, is another matter. The AP recently ran an excellent feature on the slow movement to excavate in the Kingdom, and the pitfalls of finding a cross, or a star, or a depiction of the Prophet, in a country whose ruins remain essentially untouched.

The sensitivities run deep. Archaeologists are cautioned not to talk about pre-Islamic finds outside scholarly literature. Few ancient treasures are on display, and no Christian or Jewish relics. A 4th or 5th century church in eastern Saudi Arabia has been fenced off ever since its accidental discovery 20 years ago and its exact whereabouts kept secret.

In the eyes of conservatives, the land where Islam was founded and the Prophet Muhammad was born must remain purely Muslim. Saudi Arabia bans public displays of crosses and churches, and whenever non-Islamic artifacts are excavated, the news must be kept low-key lest hard-liners destroy the finds.

“They should be left in the ground,” said Sheikh Mohammed al-Nujaimi, a well-known cleric, reflecting the views of many religious leaders. “Any ruins belonging to non-Muslims should not be touched. Leave them in place, the way they have been for thousands of years.”

In an interview, he said Christians and Jews might claim discoveries of relics, and that Muslims would be angered if ancient symbols of other religions went on show. “How can crosses be displayed when Islam doesn’t recognize that Christ was crucified?” said al-Nujaimi. “If we display them, it’s as if we recognize the crucifixion.”

My recent piece on the problems of architectural preservation and development in Damascus for GlobalPost.com:

DAMASCUS, Syria — Like Cairo’s Pyramids and Shiraz’s roses, to paraphrase travel writer Colin Thubron, the oasis of Damascus conjures running water. But that was 40 years ago.

These days the Barada River runs dry through one of the world’s oldest cities. Meanwhile tourists, long a rarity in the socialist Syria of Hafez al-Assad, are now flocking to the historic center of Damascus.

But a boon for the country’s economy and image is also a threat to the capital’s heritage, as a spate of often-hasty building restorations and conversions in the UNESCO-protected Old City has turned the area into a kind of historicist fantasyland of nostalgic architecture driven less by preservation than development.

Along with Aleppo, Damascus boasts the highest concentration of preserved, traditional Arab residential architecture in the Middle East. For decades the Ottoman-era courtyard houses and merchant palaces in the half-square-mile Old City crumbled as wealthier residents left for Western-style apartments in garden suburbs outside the city center. The flight began under the French Mandate in the 1930s and continued after Syrian independence in 1946 and throughout the end of the 20th century as the city’s suburbs expanded along the dry hills that edge the city.