I’ve been looking at this picture — an old postcard of Tahrir I got in Cairo in 2009 and now have on my book shelf in England — since January 25th. 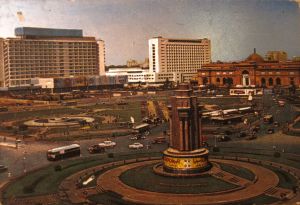 Today I read this essay by Mohamed ElShahed in the Architect’s Newspaper, about the history of architectural possibilities in Midan Tahrir, and I had to approach the picture again:

With the current revolution underway, architects, planners, and dreamers have been calling for meetings, discussions, and debates on what to do with the square. Topics of discussion include: should it be redesigned and how; how will the revolution and the martyrs be memorialized; and should it be renamed…

… Cairo has always been a city of great works of architecture and intelligent city planning. It is also a city marked by many failures at the hands of hasty architects and unimaginative politicians. Yet no one politician or architect has been able to lay claim over the design and symbolism of Tahrir Square, which remains as a collection of fragments from many failed or unfinished plans and urban fantasies.

An appropriate book arrived in the mail today, just in time for questions of urban modernity in the Middle East. I’ve been looking for pieces about Tahrir’s architectural history and how the built environment affected political action in the Egyptian revolution, and this other very interesting piece by ElShahed gets at that, with great photos of Tahrir in the early 1960s and in the Mubarak years, when everything green was replaced by permanent construction sites and hemmed by fences, “part of the government’s policy of discouraging public assembly.”

The statue-less column in the center of the midan is long gone, though we can still remember it with Sonallah Ibrahim:

The importance of this square does not lie in the fact that it constitutes the center of the city, or that it is surrounded by strategically important buildings like the Hilton Hotel, the Egyptian Museum, the Mugama (which comprises 1,400 offices occupied by thirty thousand employees who deal with sixty thousand people per day), and the American University. Nor is it important because at its center stands an empty statue base erected twenty-five years ago, after the death of Abd al-Nasser, for which the Egyptians have yet to choose a personality to occupy it; nor because, according to a popular joke initially targeting one of the Arab kings, it is the space used by the prime minister to distribute the national budget: he stands at the center of the square and hurls the national budget into the air, taking what lands on the ground for himself and giving what remains in the air to the people.