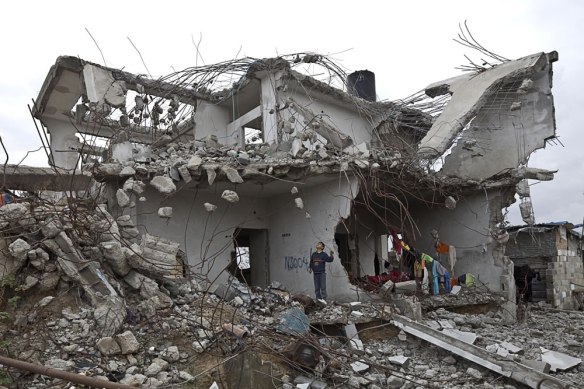 Eyal Weizman in the LRB on Israel’s strategies of spatial control over Gaza — and Israel’s cynical, shocking legal acrobatics to consider a Palestinian civilian in Gaza as a “voluntary ‘human shield.'”

We will learn more about the way Pillar of Defence was conducted when, over the coming weeks, it becomes possible to start reading the rubble. Some of what we know about the 2008-9 assault comes from an archive – the Book of Destruction – compiled by the Hamas-run Ministry of Public Works and Housing. The archive contains thousands of entries, each documenting a single building that was completely or partly destroyed, recording everything from cracked walls in houses that still stand, to complete ruins. The ministry will no doubt put together a new archive following the latest attack. Its list will be a close parallel to the one contained in a document owned by the Israeli military. This is the Book of Targets in Gaza, a thick blue folder that the outgoing chief of staff, Gabi Ashkenazi, who presided over Operation Cast Lead, passed to his successor in a televised ceremony at the beginning of 2011: ‘I want to hand over something I carry with me all the time,’ he announced.

Now that the bombing is over, evidence will be accumulated (and allegations made and contested), not only by speaking to survivors and witnesses but by using geospatial data, satellite imagery of destroyed buildings and data gathered in on-site investigations. But investigation is difficult: in Gaza ruins are piled on ruins, and it isn’t easy to tell them apart. The wars of 1947-49, the military incursions of the 1950s, the 1956 war, the 1967 war, the 1972 counterinsurgency in the refugee camps, the first intifada of 1987-91, the waves of destruction during the second intifada of the 2000s, and now the two attacks of 2008-9 and 2012, have each piled new layers of rubble on top of those produced by their predecessors.

The Book of Destruction is also a haunting publication by the excellent photojournalist Kai Wiedenhöfer, published after the last war on Gaza in 2008-09. Get it. Both photos in this post are from Wiedenhöfer’s book. 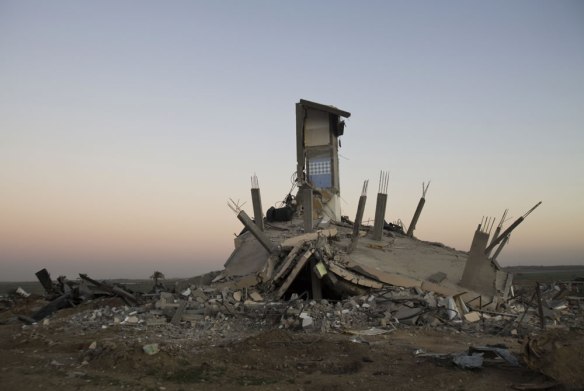